Our favorite reported from Kazakhstan may be making a comeback as recent footage on YouTube seem to show that Borat 2 is filming in Los Angeles.

The first film, whose full title is Borat: Cultural Learnings of America for Make Benefit Glorious Nation of Kazakhstan, was released in 2006 as a mockumentary about the titular character, played by Sacha Baron Cohen, coming to America to become a reporter and learn the culture. While it has become something of a cult icon, with many fans being able to quote it to this day, the film has drawn criticism for its portrayal of people from Kazakhstan and the fact that Cohen is not Kazakh.

However, it looks like he is bringing the character back for another adventure if some footage that has appeared on YouTube is any indication. 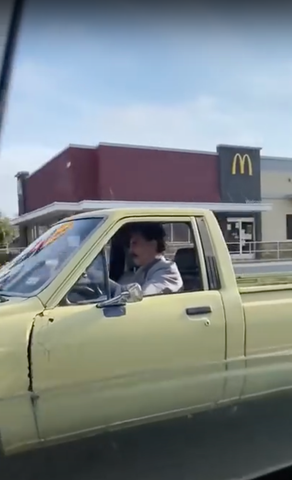 As you can see in the picture above, it certainly looks like Sacha Baron Cohen in the costume. And if that isn’t enough to make you believe, another angle shows a camera crew filming the truck, which all but confirms the character is coming back in some way. 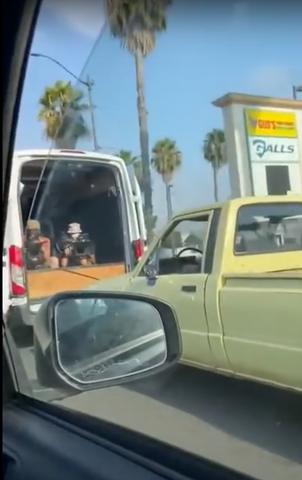 The Perfect Time for Borat

Of course, it could be something other than a second film, but we wouldn’t be surprised to see Borat making an appearance again with the current state of the country. The first film showed us the ridiculous, not-so-proud parts of the U.S., and now with the current pandemic causing further political schisms along with the Black Lives Matter movement, it seems like the perfect set-up for a second go around for Borat. We can only imagine Borat at a Trump rally.\

Cohen is a lover of exposing these kinds of things, with his recent HBO series, Why is America?, following in that same vein, often to hilarious, yet truly embarrassing, results.

If it is Borat 2, this would make the first of Cohen’s characters to get a sequel film. He has played other characters such as Bruno and Da Ali G, but given Borat being what put him in the spotlight, it makes sense for this to be the first character for him to return to.

We haven’t had any news or confirmation about another film or any other way for the character to return, so anything is just conjecture at this point. Hopefully, we will be able to learn more very soon.

For all your Borat news and more, be sure to check back in here with GeekHash. Posted by ThomasM - February 24, 2020 0
LETS GO BOYS! The race is on guys! Sony and Microsoft have been gearing up to reveal the next generation… Posted by Shane Black - June 3, 2020 0
The next-gen consoles are fast-approaching, and with them, many players are wondering what the Xbox Series X and Playstation 5… Posted by ThomasM - May 26, 2020 0
What Could Have Been Fans of Star Wars had always hoped that there would be some sort of sequel to…